A Declaration of Interdependence 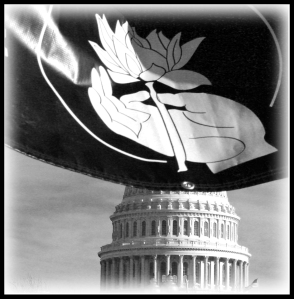 One of the nice things about writing a blog for a while is that you can start “re-purposing” yourself, as they say, when it’s summer and you start feeling lazy. So as we enter into the Fourth of July weekend here in the U.S., here’s a post from last July. Still relevant, I think. May you all have a happy and safe weekend. ~Maia

As the Fourth of July approaches, I’d like to offer an alternative way to think about and celebrate the day. How about a day of remembering how interdependent we all are?

The essay was updated in 2006 and the questions at the bottom were added at that time.

A Declaration of Interdependence:
A Call to Transform the Three Poisons for the Sake of All Sentient Beings

As concerned global citizens and as members of a diverse Buddhist community, we want to contemplate and question the role of government in creating a civil and compassionate society. From the standpoint of interconnectedness, those of us living in the United States have a special responsibility to the whole world to explore this question. We know our government is in a position to effect great social change all across this world—change that can be both positive and negative.

Like most people, we are concerned about the war in Iraq, terrorism, deteriorating public schools, low-paying jobs, racism, and vanishing civil liberties. We are concerned that politics as usual— whether Democratic or Republican—offers little or no meaningful change of direction. Yet we refuse to succumb to apathy, cynicism, or anger. We seek a politics rooted in compassion and generosity born in each of us. Compassion means, literally, to suffer with, to recognize our human connection across all lines of race, culture, nationality, and identity. Generosity means to give freely of what we have, because giving to others is the natural expression of seeing others as ourselves.

Buddhist practice and ethical precepts call forth a range of beneficial views that apply as much to society as to individuals. Twenty-five hundred years ago, when Shakyamuni Buddha was enlightened under the Bodhi Tree, he said, “Now I am awakened together with all sentient beings.” Every person on the planet has the full capacity to wake up from the mistaken notion that we are separate from each other. Each of us is connected interdependently with all others, including those who disagree with us. This understanding leads to a reverence for the preciousness of all sentient life.

There are barriers, however, that make people and nations believe that they are separate. From a Buddhist perspective, the “three poisons” of greed, hatred, and delusion cloud our minds and skew our actions:

• Greed is the driving force in a consumer society that supports undemocratic corporations that sell us things we don’t need. Greed is also at the root of a system in which people, including government officials, are corrupted by the seemingly insatiable appetite for money and power. Looking deeply, we see that nothing can be hoarded, accumulated, or held on to. We understand, too, that those things we take from others that are not freely given—resources, labor, wealth, votes, and more—are the birthright of all people. All people have the right to decide how these resources are used.

• Hatred gives birth to war, prejudice, and repression. Those forces tend to perpetuate themselves in a ceaseless cycle of violence and militarism. As Buddhism and other faith traditions affirm, “Hatred does not cease by hatred, but only by love.” Hatred is rooted in separateness; compassion is rooted in connection. Which way would we wish to turn?

• Delusion, or ignorance, stems from our tendency not to see reality just as it is. We are schooled in delusion by systems of indoctrination and mass media that condition us from early childhood to buy into the false promises of consumerism and American exceptionalism. Delusion is the driving force evident in our ever-more centralized media.

And finally, we do not have government of the people, by the people, and for the people. Rather, government has become a holding company for corporate control. When we fail to point out the unraveling of our democratic system, and—as the aftermath of Hurricane Katrina made clear— the way in which so many citizens lack even the necessities for a life of self-respect, we have fallen prey to the delusion of separateness, and we disempower ourselves and others.

The current political and economic system is tainted by these poisons, which necessarily reinforce each other. When we spend many billions of dollars on a foreign war premised on lies and distortions, we have no money to buy food, medicine, and first-class education for the poor at home…or for displaced peoples in need around the world. So a spiral of anger, resentment, need and confusion spins on and on.

And yet we are called to participate in this very system, even with all its injustices and inequalities. The task before us requires presence of mind, awareness, patience, and perseverance. We wish to be part of a polity that is genuinely representative and fully participatory.

All of us—whatever our faith, political affiliation, cultural background, or economic status—have the same wish for safety and well-being. We may agree or disagree with each other. We may approve or disapprove of a given candidate or representative’s positions. But in these decisive times, when so much is at stake, we must act with courage.

Traditional Buddhist teachings invite us to consider the well-being of the generations to come, seeing the future of parents, children, and loved ones. How will our loved ones be impacted if we fail to take care of the present? This kind of care calls for transformation: personal, political, economic, social, and cultural. Transformation is difficult work. We are often afraid to exchange a familiar situation—even one that causes us suffering—for a future that is unknown. Our challenge is to step into the unknown and not fear change or discomfort. Our challenge is to understand that principled conflict is often the midwife of transformation.

With these principles in mind, we offer three areas of transformation to apply when designing policies that will shape lives around the world. As students of the Buddha’s way of wisdom and compassion, we vow to practice these principles in our own lives, and to bring this understanding into our work in the social and political realms:

• Transform hatred into love and compassion.

• Transform ignorance into clarity and attention.

The Declaration of Independence of the United States says, “All men [and women] are created equal.” In Buddhism, the corollary teaching is that within each of us there is innate goodness and wholeness. Actualization of these ideals is only possible in a life-affirming society. Therefore, it is our responsibility to create the social conditions and political structures that enable people to live with dignity, honor, safety, and sufficient resources.

Questions for Reflection and Discussion

1. How do the three poisons of greed, hatred, and delusion manifest in my own life as a global citizen? For example, what are my consumption patterns around food, oil, and other limited resources?

2. What is one way in which I can work to transform my personal relationship to greed, hatred, or delusion? How can my dharma practice support this process of transformation?

3. How do the three poisons manifest in the social and political structures in my local region? For example, how does ignorance take form in our school/educational system?

4. What is one local issue that I would like to engage with, and what are some ways that I can support the cultivation of generosity, compassion, and clarity in this area?

I've been practicing and studying the Buddha way since 1994, and exploring the question "What is engaged Buddhism?" since the late 90s. As former executive director of the Buddhist Peace Fellowship and editor of its journal, Turning Wheel, I had the honor of meeting and working with many practitioners of engaged dharma, including Roshi Joan Halifax, Joanna Macy, Alan Senauke, and Robert Aitken Roshi. I write about socially engaged Buddhism on my blog, "The Jizo Chronicles," as well as on the theme of personal and collective freedom on my website, "The Liberated Life Project." Through my Five Directions Consulting, I offer support to individuals and organizations who aspire to integrate awareness into their work.
View all posts by Maia »
← Quote of the Week: Dr. B. R. Ambedkar
Quote of the Week: Dr. Margarita Loinaz →