A Place for Political Buddhists … The System Stinks! 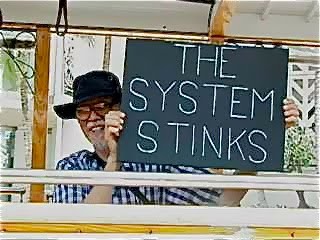 “Imagine thousands of people skilled in both organizing and Buddhism,
out in the world working to transform it in the ways we need most.
All with the compassion and wisdom practices that lie at the heart of Buddhism.”
~Katie Loncke

Are you a Buddhist who thinks that talking politics and taking action are an essential part of your dharma practice?

If not, you can stop reading right now.

But if you are, there’s a fantastic new project in the works from the Buddhist Peace Fellowship that you’ll love.

BPF has a special place in my heart — I worked there from 1999 – 2002 as the associate editor of Turning Wheel magazine, served on their board from 2003 – 2004, and then was invited back to serve as executive director from 2004 – 2007. While the structure and staffing of the organization have changed a great deal since then, the mission remains the same:  to serve as a catalyst for socially engaged Buddhism and to cultivate compassionate action.

Now, the dynamic new collaborative leadership of BPF, embodied by co-directors Katie Loncke and Dawn Haney, are creating “The System Stinks” (inspired by one of Robert Aitken Roshi’s favorite phrases). This will be a 12-month dialogue and crowdsourced curriculum, hosted online,  with options to participate by phone and in face-to-face, self-organized local study groups.

The “System Stinks” will create space and opportunities to explore themes like:

Katie and Dawn write, “As Buddhists who care about politics, we need to find each other, learn about one another, and start to discover what role engaged and political Buddhists can play in today’s world.”

You can help make this initiative a reality by donating to BPF’s Indiegogo campaign. Some of the great perks for doing so include

So give our friends at BPF a hand and help be part of creating a very innovative practice/study/action opportunity for engaged Buddhists worldwide. The Indiegogo campaign ends on November 15th, so check it out soon!

And a special bonus: For the next week, everyone who contributes to BPF’s campaign at $30 or more will be entered to win one of 10 slots for a group phone call with a wonderful Buddhist leader — Joanna Macy, Bhante Buddharakkhita, Roshi Joan Halifax, or Hozan Alan Senauke.

I've been practicing and studying the Buddha way since 1994, and exploring the question "What is engaged Buddhism?" since the late 90s. As former executive director of the Buddhist Peace Fellowship and editor of its journal, Turning Wheel, I had the honor of meeting and working with many practitioners of engaged dharma, including Roshi Joan Halifax, Joanna Macy, Alan Senauke, and Robert Aitken Roshi. I write about socially engaged Buddhism on my blog, "The Jizo Chronicles," as well as on the theme of personal and collective freedom on my website, "The Liberated Life Project." Through my Five Directions Consulting, I offer support to individuals and organizations who aspire to integrate awareness into their work.
View all posts by Maia »
← Support Buddhist Global Relief’s Walk to Feed the Hungry
The Intersection of Engaged Anthropology and Engaged Buddhism →