Radical Dhamma: Engaged Buddhism Starts on the Cushion But it Can’t End There 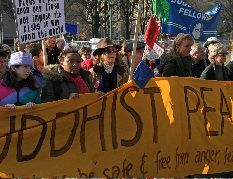 This past Monday, we had a memorial service for Robert Aitken Roshi at the Upaya Zen Center temple. We were on the last morning of our seven-day Buddhist Chaplaincy Training intensive, and I’d just been blessed to spend the week with 38 chaplaincy students, Roshi Joan Halifax, Sensei Fleet Maull, and Jimmy Santiago Baca, all of us exploring “Dharma at the Edge.”

Roshi Joan asked me to say a few words about Aitken Roshi during the service. As I prepared to do that, I remembered just how radical Aitken Roshi was in his life and in his Buddhist practice. As I recounted before on this blog, I got a chance to spend three days with him back in 2005. I’ve never forgotten his encouragement to me to ensure that the Buddhist Peace Fellowship would not forget its radical, anarchist roots, and to keep placing ourselves in harm’s way if need be for the protection of all beings and of the Earth.

Some time after my trip to Hawai’i to meet Roshi, he sent me a gift in the mail – a copy of the book Death in the Haymarket: A Story of Chicago, the First Labor Movement, and the Bombing that Divided Gilded Age America. This was characteristic of his great generosity as well as his desire to educate fellow Buddhists about the mechanics of radical social change and anarchism. I still can hear his strong voice in my head: “It’s not enough to sit on the cushion.” Roshi’s heroes were people like Dorothy Day, Emma Goldman, Philip Berrigan, Daniel Ellsberg, and Kathy Kelley (of Voices in the Wilderness).

Yesterday, I came across a wonderful piece of writing from sister blogger Katie Loncke. She writes:

As Buddhists and dhamma practitioners, I would love to see us having more conversations about what compassion and social change actually look like: locally, on the ground, in practice.  Because it’s too easy for us to invoke these words — compassion, inner work, social change — and assume that everyone is on the same page.

The truth is, we’re not all on the same page.  And it’s not until after the event is over, on the subway ride home, when a gaggle of us start discussing in detail the relationship between inner and outer work, that these fundamental differences emerge, sharp and cold, like mountain peaks, from the soothing golden fog of Buddhist unity.

Katie then goes on to outline five points where she digresses from “spiritual liberalism”:

1.  Mystified Mechanism. When we start doing the inner work of developing compassion and insight, our outer social justice work will automatically get good.

How?  Sometimes folks talk about spirituality helping to reduce burnout, or converting the motivation of anger into the motivation of compassion.  But while both are wonderful benefits, neither speaks to the testable effectiveness of the particular outer work itself.

2. Healing As (Total) Resistance. Smiling at strangers on the subway is resisting militarism.

Well, I disagree.  Our healing work, spiritual work, and structural resistance work ought to inform each other, but they are not interchangeable substitutes.  Mandela didn’t inspire a movement and challenge the status quo just by praying compassionately for the liberation of the oppressor. (Though he did that, too.)

3. Social Change Relativism. Together, a growing movement is working for peace and justice in the world.  From green business to prison meditation to high-school conflict resolution programs on MTV, signs of hope and change abound.

Are all forms of progressive activism equally useful?  No.  But the shorthand of social change frequently obscures this fact.  Coupled with a feel-good engagement paradigm, the ‘every little bit helps’ idea makes it very difficult to hold each other accountable for our political work and its actual outcomes.

4. Root vs. Radical. Radical political agendas fail to grasp the root cause of oppression: dualism.  And ultimately, the best ways of overcoming dualism are through meditation and small-scale, intimate, interpersonal, compassion-building exercises.

Even if dualism is the “root cause” of oppression, that doesn’t make it the best or most actionable point for resistance, always.  Besides: why is this idea of dualism so pervasive and tenacious, anyway?  In large part because of the political and material structures (i.e. schools, economies, hierarchical religious institutions) that train human beings.  Without changing the power relations governing those material structures, there’s little hope of giving non-dualistic living, and appreciation for inter-being, a real shot on a global scale.

5. Bhudd-opian Visions. Gandhi said it best: “Be the change you wish to see in the world.”

Often, this gets construed to mean: build the best alternative society you can, and slowly it will change the entire society.  Especially in Buddhist communities that prize extended retreat time, a decade of study with a realized Asian master, and this sort of removal from everyday householder society, there’s a danger of trying to build our sanghas into utopias, and assuming that they will automatically radiate peace and well-being into the world.  Might be true on an individual or small-group level, but why should we believe that we can scale up well-being from personal transformation to world peace, without specific strategies for tackling enormous material systems?

I think these are really important questions, and I bow in gratitude to Katie for bringing them forward. On the same morning I came across Katie’s article, I also happened upon this piece on Transformative Organizing (TO) from this year’s US Social Forum. I’ll write more on this in another post, but in a nutshell, “TO is about creating deep change in how we are as people, how we relate to each other, and how we structure society. It brings together approaches to transformative change, ideological development, and impactful grassroots organizing to create a new paradigm for organizing.”

The interesting thing to me is how TO starts from the basis of effective organizing, and enfolds both inner and outer transformation from there. Too often, I think that many of us as engaged Buddhists give short shrift to the dimension of outer transformation, as well as the challenges in our relationships with each other, especially when there are power inequities based on race, class, and gender. It’s kind of like a spiritual/political bypass.

Meanwhile, in Montague, MA, this week, hundreds of people are attending the Engaged Buddhist Symposium at the Zen Peacemaker Institute. I wonder if these conversations are happening there as well, if people are exploring where the radical edge of dharma lies, and how we as practitioners in this day and age, living in this profoundly broken yet beautiful world, can really get down in the dirt with all beings.

If you’re at the Symposium, or if you have thoughts about all this, I’d love to hear your voice in the comments below.

I've been practicing and studying the Buddha way since 1994, and exploring the question "What is engaged Buddhism?" since the late 90s. As former executive director of the Buddhist Peace Fellowship and editor of its journal, Turning Wheel, I had the honor of meeting and working with many practitioners of engaged dharma, including Roshi Joan Halifax, Joanna Macy, Alan Senauke, and Robert Aitken Roshi. I write about socially engaged Buddhism on my blog, "The Jizo Chronicles," as well as on the theme of personal and collective freedom on my website, "The Liberated Life Project." Through my Five Directions Consulting, I offer support to individuals and organizations who aspire to integrate awareness into their work.
View all posts by Maia »
← Robert Aitken Roshi: Travel Safely and Swiftly
Quote of the Week: Bernie Glassman Roshi →