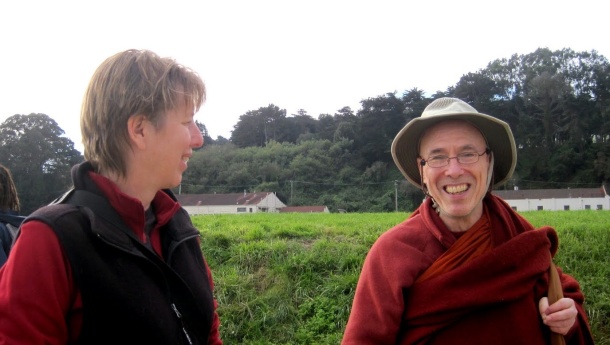 Today we’re kicking off a monthly series of profiles about socially engaged Buddhists.

I couldn’t be more delighted to feature Ven. Bhikkhu Bodhi in this first profile. I first met Bhikkhu Bodhi when he came to the 2007 Buddhist Peace Delegation in Washington, DC. He gave a stirring speech the night before we marched, as he linked the teachings of the Buddha with the imperative to work for peace in the world and to end the war in Iraq.

Last year our paths crossed again in San Francisco, where I joined Bhikkhu Bodhi in a walk along the Bay (photo above) along with his colleagues from Buddhist Global Relief (BGR), and other dharma friends including Alan Senauke and Katie Loncke.

It’s an honor to spend time with someone who is such an accomplished scholar and has a heartfelt commitment to alleviating suffering. I hope you enjoy getting to know Bhikkhu Bodhi better through this interview… and make sure to check out the annual Walk to Feed the Hungry happening on September 10th, organized by BGR. There are many ways to be involved!

JC: Where do you call home?

Bhikkhu Bodhi: Technically, a monk is a “homeless person,” so, in compliance with this tradition, I would have to say that I have no home. But as a matter of practical convenience, for the past four years I have been residing at Chuang Yen Monastery, in Carmel, New York, a woodlands area in the beautiful and quiet Hudson River Valley. At the monastery, I live in Tai Hsu Hall (named after the famous Chinese Buddhist monastic reformer of the early twentieth century), which is separate from the other monastic residences and thus serves me virtually as a hermitage on the premises of the monastery.

JC: What are you reading right now?

Bhikkhu Bodhi: I read simultaneously along several tracks. For my Buddhist reading, I have been reading, in Chinese, the Mahasamnipata Sutra, a collection of Mahayana sutras preserved in the Chinese Tripitaka. I’ve also been looking at the Pali commentary to the Suttanipata, though hardly reading it in a sustained way.

For edification in social and cultural matters, I just recently finished reading Democracy Incorporated: Managed Democracy and the Specter of Inverted Totalitarianism. This is a brilliant analysis of the predicament of modern American democracy by Sheldon S. Wolin, professor emeritus at Princeton University.

Bhikkhu Bodhi: My greatest inspiration in my life as a Buddhist monk has been the person who served as my mentor during my years in Sri Lanka, the German elder Ven. Nyanaponika Thera (1901-94). It was his clear comprehension of the intersection between the ancient Buddhist teachings of the Pali Canon and the compelling needs of our time that gave me the perspective and sense of direction that has guided my own development as a Buddhist monk and teacher.

Over the past ten years, since my return to the U.S. and my affiliation with Chinese Buddhists, I have been greatly inspired by three modern Chinese Buddhist masters who are hardly among American Buddhists (hardly surprising when their works are virtually untranslated). One is Ven. Tai Hsu, mentioned above; the second is his student, Ven. Yin Shun (1906-2005), widely regarded as the foremost Chinese scholar-monk of the past century; and the third is Ven. Jen Chun (1919-2011), a senior student of Ven. Yin Shun and the founder of Bodhi Monastery in New Jersey, where I lived for four years. All three of these teachers emphasized what Yin Shun called “Buddhism for the human realm,” an approach that advocates a fusion of the “world-transcending” aspect of the Dharma with its capacity for world transformation and the ennoblement of human life in our concrete existential situation. Incidentally, I recently read an essay in which Thich Nhat Hanh is cited as calling Yin Shun “the Buddhist teacher whom I most revere.” I cannot testify to its accuracy, but Nhat Hanh’s “Engaged Buddhism” seems to be a free rendering of Yin Shun’s renjian fojiao refracted through French existentialism.

Apart from Buddhist thinkers, the persons I have come in recent years to admire most are those engaged in the struggle for a more just and compassionate world. Martin Luther King’s speeches and writings have impressed me with their powerful currents of deep spiritual faith and social conscience; King has acquired accelerating a relevance, especially as the militarism and social injustices that he decried long ago have become so badly exacerbated over the past decade. I also greatly admire Bill McKibben for his courage in leading the campaign against the ravages of climate change.

Perhaps it was through my practice of the meditations on loving-kindness and compassion that I felt “a call of conscience,” a sense that our Buddhist practice should enable us to share the sufferings of those weighed down by grinding poverty…

JC: What social issue is close to your heart right now?

Bhikkhu Bodhi: There are two issues, intimately interwoven, that are close to my heart right now. The one with which I am most directly involved is global hunger and chronic malnutrition, which afflicts close to a billion people around the world and claims 10 million lives a year, 60% of them children. It was to tackle this problem that, together with some of my friends and students, I established Buddhist Global Relief three years ago. In these three years we have already launched over twenty projects that provide food relief and educational aid to people in poor communities in countries ranging from Vietnam and Cambodia to Mali, Niger, and Haiti, and also in the U.S.

But food availability is closely connected with climate change. If the earth’s climate changes at its current rate, the consequences will include a drastic reduction in the world’s resources of food and water. The result will be mass starvation, political chaos, terrifying violence, and regional wars. Hence my concern with alleviating global hunger also spills over into a concern with preventing runaway climate change.

JC: How does your dharma practice inform your involvement on that issue?

Bhikkhu Bodhi: During my early years as a monk, I hardly paid any attention to social issues. My focus was almost entirely on my Dharma studies and personal spiritual development. In recent years, however, I came to feel increasingly a sense of responsibility for the fate of the world. The conviction came to me that a predominantly personal and private approach to spiritual development is sadly inadequate as a response to the crushing misery that afflicts billions of ordinary nameless people around the world. Perhaps it was through my practice of the meditations on loving-kindness and compassion that I felt “a call of conscience,” a sense that our Buddhist practice should enable us to share the sufferings of those weighed down by grinding poverty, compelled by an unjust system to endure constant hunger, fear, and the threat of disabling illnesses without adequate medical services. As this conviction gained momentum in my mind, and I met people with similar sentiments, this led to the creation of Buddhist Global Relief in mid-2008.

JC: If you could invite people to join you in taking one action on that issue, what would it be?

Bhikkhu Bodhi: It is hard to limit my invitation to one issue. I should mention, though, that Buddhist Global Relief will be holding its second annual “Walk to Feed the Hungry” on September 10th, in at least three places: New York City (Riverside Park), Michigan (Kensington Park), and the Bay Area of California.

For details, please check our website: www.buddhistglobalrelief.org. I invite those who live in these areas to join us on this walk (I will be walking in Michigan); if this is not possible, please consult our website and, through First Giving, consider sponsoring those who will be walking. All donations go to support our Fall-Winter 2011 projects.

JC: What else would you like people to know about you?

Bhikkhu Bodhi: I should mention that I also translate Buddhist texts from Pali into English. A couple of months ago I completed a translation of the Anguttara Nikaya, which has been submitted to Wisdom Publications and will be published in 2012. I donated a substantial portion of the royalties from my earlier publications to create, through Wisdom, a Nikayas Fund. The intention is to donate sets of the English translations of the four Nikayas to monasteries and libraries in the disadvantaged countries of Buddhist Asia, Eastern Europe, and elsewhere where the costs would be formidable.

I've been practicing and studying the Buddha way since 1994, and exploring the question "What is engaged Buddhism?" since the late 90s. As former executive director of the Buddhist Peace Fellowship and editor of its journal, Turning Wheel, I had the honor of meeting and working with many practitioners of engaged dharma, including Roshi Joan Halifax, Joanna Macy, Alan Senauke, and Robert Aitken Roshi. I write about socially engaged Buddhism on my blog, "The Jizo Chronicles," as well as on the theme of personal and collective freedom on my website, "The Liberated Life Project." Through my Five Directions Consulting, I offer support to individuals and organizations who aspire to integrate awareness into their work.
View all posts by Maia »
← End-of-Summer Letter to Readers of The Jizo Chronicles
The Robe Chant (slightly edited) →