Why I’m Involved in the Occupy Movement 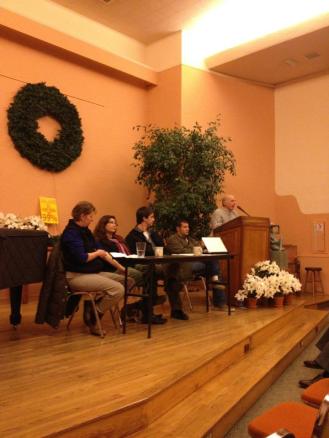 This past week, I was invited to be on a panel (along with three other people) at our local Unitarian Universalist Church and to speak about my perspective on the Occupy Movement.

Here are the questions that we were invited to address:

If you’re still on the fence about this movement, I encourage you to read on.

One of my big messages to the audience at the UU church was: get involved. I can think of no reason why anyone who has an income of less than $100,000 a year would not benefit from investing your time and energy in this movement in order to help midwife a systemic shift from greed and competition toward generosity and cooperation.

And even if you are one of the folks who is blessed with a higher income, I strongly believe that you will benefit as well. How truly happy can any of us be when we live in a society that has as much economic injustice and disparity as ours does? This movement will not really succeed until 99% becomes 100%.

Make no mistake – this work is as much internal as it is external. This, to me, is the intersection with socially engaged Buddhism. Think of the world in terms of the three poisons: greed, hatred, and delusion. The Occupy Movement is all about addressing the harm caused by corporate greed — but this is not separate from addressing the seeds of greed that live within each of us. There’s a lot more to say about that, of course, but I’ll save that for another post.

So, here’s what I offered to the UU panel this week:

If you have a history of activism, talk a little about that first.

First, I have to say that I’m not particularly fond of the term “activist.” I think it has a way of excluding people who might be inspired to take action, but think of “activists” as a different kind of people who wear Birkenstocks and patchouli. I think a better term is “people who care.” Because ultimately, I think all of us care about the world we live in and probably want to make it better for ourselves and our loved ones.

Having said that, my own path to becoming a more caring person started when I was in my 20s and I worked as a mental health counselor in New Haven, CT. I witnessed how many of my clients were suffering not only because of their psychiatric challenges, but often more so because of the system they had to live in… a lack of affordable housing, abysmal medical and psychological care for those who had no resources, social stigma.

Over and over, I saw my clients ending up back in state mental hospitals – not so much because of their illness, but because it was simply too difficult to survive in that environment.

I went on to get a graduate degree in anthropology and that helped me to understand the situation I had witnessed from a more systemic perspective. I began to see how structural violence unfolds and plays out in our economic system, our health care system, and other locations. So often in our culture, individual people get blamed – for not working hard enough, for not being tough enough, it goes on and on. When you look at a whole system, you realize it’s bigger than any one person and that these systems do have an effect on the way we live our life. That’s not to remove individual responsibility entirely, but it’s not the whole story.

I became very involved in social change work in Buddhist communities and I worked at the Buddhist Peace Fellowship, a national nonprofit based in the SF Bay Area, for many years. I was part of the movement to end the war in Iraq and was arrested for civil disobedience at the start of the war, in March 2003.

What brought you to the Occupy generally and Occupy Santa Fe in particular?

Like many of us, I think, I have had a deep sense that something was wrong in the country, and in the world, for many years now. For me, that’s taken the form of addressing the rampant militarism in our country, the wars in Iraq and Afghanistan, and also trying to address diversity issues and educate myself about how racism, classism, and other kinds of oppression play out in our lives. But my activism has felt very fragmented because I felt like all of these were just part of the problem, and somehow we weren’t coming at the thing in a holistic way.

When the Occupy movement came along, it took me a couple of weeks or so to fall in love with it, but I finally did because my sense was that something in this movement was connecting all the dots. You could sense it when you watched the people in Zucotti Park as they held meetings and struggled valiantly with being a true participatory democracy.

I believe the Occupy movement has the potential to link people together across diverse groups, because all of us are being so dramatically impacted by one thing: corporate greed (and if we trace the source of this back even further, we begin to see how pervasive are the destructive effects of colonization).

What have been your primary roles in Occupy Santa Fe?

I’ve been to several GA meetings and participated in several of the actions and marches in October. I’ve also been helping to reach out to faith communities in Santa Fe and get them involved, as part of the Outreach and Inclusivity working group. I’m a firm believer that the most effective social change movements have spiritual and religious leaders supporting them at their core, and so that’s where I feel I can most effectively plug in. Last month I took a trip to Boston to visit the Occupy site there and to learn more about all that they’ve been doing to cultivate the faith and spirituality dimension of this movement (including the “Protest Chaplains”).

My greatest hope for Occupy is, on one level, that there can be some economic justice achieved and that we can right some of the wrongs that have happened over the past two decades. It is simply wrong, for example, that a CEO like Charles Prince of Citigroup has had absolutely no consequences for overseeing massive and intentional securities fraud. It is wrong that corporations like Bank of America are able to use so many tax loopholes.

But on a deeper level, I think Occupy can be much more than that.

I really see Occupy as a laboratory for our future society. I love what one person said to me. She said she thinks of the word “demonstration” quite literally – that we are demonstrating an alternative way to live on the planet. Another way to think of it is through the profound words from Mahatma Gandhi: “Be the change you wish to see in the world.”

And so that’s what is going on as we watch the Occupy campsites figure out ways to take care of all the people who live there, to make sure everyone has food and healthcare, to create sacred spaces for people to come together even if they may not agree on everything.

Some have critiqued the movement for not having made clear demands. There actually is a clearly articulated platform that names what is wrong with the current system and puts forth some alternatives. But maybe even more importantly, we need to realize that the change we are envisioning may not be possible within the current system. Charles Eisenstein writes about this eloquently in his piece, Occupy Wall Street: No Demand is Big Enough.

We have no idea where this dimension of Occupy is going, and in a lot of ways it’s the most tricky thing that we’re doing, because we all carry our old baggage with us, both psychological and collectively.

And that’s really my greatest concern, especially in relationship to Occupy here in Santa Fe. We’d be fooling ourselves if we didn’t see how the Occupy site here and our group is a microcosm of our community. We are dealing with all the same divisive issues that our community as a whole deals with – homelessness, addiction, divisions between those who have lots of money and those who don’t, racism, and more.

So how well we are able to navigate through those divisions with love and kindness (and to be keenly aware of our own tendencies toward greed, anger, and delusion) will make the difference in the success of this Movement.

If I have one big hope for OSF and the Occupy Movement at large, I think it’s best summed up in this quote that comes from Francisco “Pancho” Ramos Stierle, the young man who was recently arrested while meditating at the Occupy/De-colonize Oakland site:

So those are my current thoughts about the Occupy Movement. How about you?

I've been practicing and studying the Buddha way since 1994, and exploring the question "What is engaged Buddhism?" since the late 90s. As former executive director of the Buddhist Peace Fellowship and editor of its journal, Turning Wheel, I had the honor of meeting and working with many practitioners of engaged dharma, including Roshi Joan Halifax, Joanna Macy, Alan Senauke, and Robert Aitken Roshi. I write about socially engaged Buddhism on my blog, "The Jizo Chronicles," as well as on the theme of personal and collective freedom on my website, "The Liberated Life Project." Through my Five Directions Consulting, I offer support to individuals and organizations who aspire to integrate awareness into their work.
View all posts by Maia »
← Two Good Things for Jizo Chronicle Readers
Seasons Greetings →