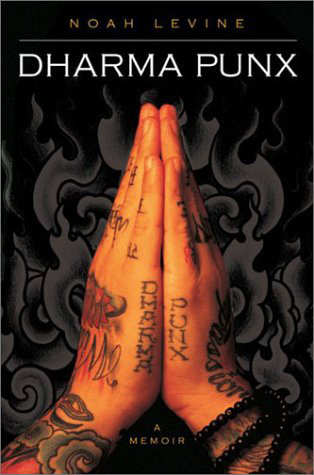 NOTE: I’m very happy to host this special guest post from Tanya McGinnity, as part of the Great Buddhist Blog Swap. Tanya is the author of the blog Full Contact Enlightenment… check it out! My part of the swap is to write something for Rev. Danny Fisher’s blog… should be posted later today or tomorrow. Enjoy…

Street Cred:
I’m feeling a bit like ‘Barbara Walters with a mohawk’ in writing this guest post on the Dharma Punx. I’m somewhat of a rubbernecker who is enthralled with them, yet hasn’t been much of an active participant in the organization. I do consider myself a ‘punk rock Buddhist’, someone who likes listening to loud, fast music and one who is political and activist minded but due my to following the beat of the Tibetan Buddhist drum, I’m not engaged in studies affiliated with their group. Yes. I do know that ‘punk’ is a labels, a concept, but the power and energy behind these labels in energizing and mobilizing young spiritual seekers has been valuable to the creation of a vibrant and active community dedicated to the preservation and spread of the dharma.

Dharma Punx / Against the Stream:
Dharma Punx is the title of a book published back in 2003 by Noah Levine (son of Stephen Levine) which documented his tough life as a drinking, drug-addicted punk rock jerk. After running out of stimulants and depressants and getting stuck in jail, Noah considered ending his life but turned towards meditation and healing as a means to pull himself out of this state of confusion and drama.

The book reads like the lives of many on the wrong path, but the ending is a happy one in that Noah turned things around, made peace with the ghosts of his past and decided to dedicate his life to helping and healing others.

As part of this service, Noah created the ‘Dharma Punx’ community to bring together those who either have walked a similar path of suffering or people who just appreciate punk music. He developed a series of teacher trainings to help cultivate facilitators in this Therevadan-oriented tradition and nationally groups have formed to sit, study and practice together.

Noah’s second book, “Against the Stream” was published in 2007 and is more of an instructive guide towards bringing Buddhism into daily life and has less of an autobiographical approach than his first book. This book spurred the development of the ‘Against the Stream Buddhist Meditation Society’ and the ‘Mind Body Awareness Project’ which are all committed to social action and activism in working with marginalized groups such at risk youth, the homeless and those who are incarcerated.

A great community of teachers motivated by the principles of socially engaged Buddhism has developed from these two organizations and super folks such as: Matthew Brensilver, Pablo Das, JoAnna Harper, Vinny Ferraro, Doug Achtert and Mary Stancavage all bring their specific flavour in delivering the Buddha’s teachings.

The punk rock koan – What is the sound of one tattooed hand clapping?
I’ve always been the quirky one in the meditation hall. Not coming from the traditional stream-enterer path of hippydom (sorry boomers), it was sometimes hard to find folks with the same interests as me and to connect on a level beyond that of a practitioner with sore sitting bones. Yes it may sound superficial or strange that being amongst a group that are looking to discover no-self, I’m bobbing around looking for other band shirt wearing selves like myself.  Maybe it’s going back to that high school desire to fit in, but hearing these shared stories from the dharma punx can give us ‘weirdo punx’ some sense of feeling that we’re not alone in our experiences. At a young age, it’s easy to want to be included in something and rather than go down a path of negativity, I’m happy that the option of finding a ‘dharma gang’ is available to those who seek it out.

New voices from young practitioners carry on the Buddha’s teachings and ensure the flourishing of the dharma here in the West. I’m so happy that this generation of Gen X Buddhists is unwilling to water down the original teachings of the Buddha and places importance as much on practicing on the cushion as that of being involved in working with the suffering of others.

Check it out for yourself:

A video interview with Noah Levine:

A treasure-trove of recorded teachings available via iTunes :